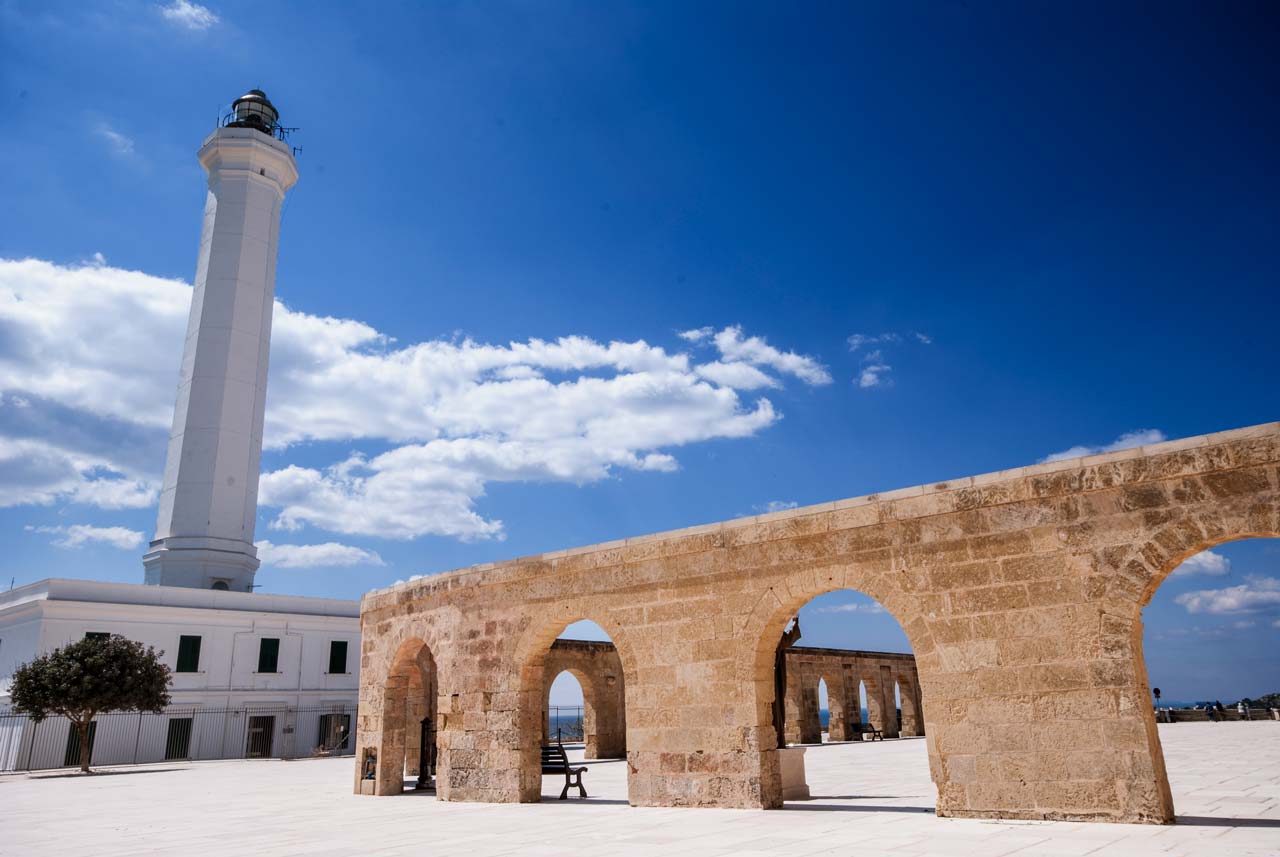 You are in the right place, we have comfortable accommodation about 300 meters from the sea.

The white houses and the blue of the sea are the first impressions that you will have reaching Santa Maria di Leuca, the final tip of the heel of Italy. Leuca marks the watershed between the Ionian and Adriatic seas. From this unique location it is possible to admire the fantastic marine panorama that is revealed on an expanse of water that bathes the banks of the sanctuary.

Staying in Santa Maria di Leuca it means traveling through time, in fact in this unique land kissed by the sea it is possible to admire small rock settlements, archaeological sites, the renowned basilica, the numerous liberty style villas and much more.

The legend of Leuca

The territory of Leuca extends from Punta Meliso to Punta Ristola, legend has it that the beautiful mermaid Leucasia fell in love with Melisso, a young Messapian shepherd who did not reciprocate his interest and temptations as he was in love with the young girl Aristula.

Leucasia continually tried in vain for Melisso and one day something happened: Leucasia surprised Melisso and Aristula by the sea, immediately a violent jealousy broke out that led the siren to cause a storm that drowned the two lovers.

From the temple the goddess Minerva looked sorry at what was happening and to remedy she decided to petrify the covers of the two victims. From here Punta Ristola and Punta Meliso were born, a symbol of eternal love between the two young people who, although they could not touch each other as they were far apart, were able to love each other forever embraced by the sea where the land ends.

Rent a apartment in S. Maria di Leuca it is the best choice to experience the area, to admire the centuries-old olive groves and to get to know the local culture made of ancient traditions and healthy food. For those who arrive for the first time in the extreme south of Italy it will be inevitable to be fascinated by the conservation of the landscape, in fact arriving at this tourist destination you will dive between the meeting of the two seas and the countryside colored by the green of olive trees and flowers wild animals that camp along the farms.

The coast of S. Maria di Leuca it is purely rocky with sandy coves, there are several bathing establishments that offer various services such as sunbed and umbrella rental or refreshment service for lunch and dinner.

Becoming a basilica in 1990 the ancient temple of Leuca was transformed in the first century. DC in place of worship for Christians. Over the course of time there have been numerous thefts and looting by invaders from the sea.

For this reason, during the various restructuring phases, the Basilica of Leuca was fortified to prevent access to the bad guys. In front of the Sanctuary there is the column with Corinthian capital on which the statue of the virgin built in 1964 is placed. For tourists and locals, visiting this place means knowing the deep Christian roots in the last part of Italy.

Leuca and the lighthouse

Also on the square in front of the Basilica there is the lighthouse of Santa Maria di Leuca about 48.6 meters high. Initially during its construction, the lighthouse was powered by oil and then converted to electricity in 1937. It is possible to reach the imposing lighthouse by climbing the staircase consisting of 254 steps. Its powerful light in excellent weather conditions is visible up to 45km away.

Visiting the old port you can admire the Monumental waterfall. This construction represents the mouth of the Apulian Aqueduct on the sea. Since 2015 various maintenance interventions have given greater splendor to this architecture which today can also be admired at night thanks to the lighting system. For both tourists and locals, admiring the illuminated waterfall is a unique emotion.

Are you are looking for one holiday home in Santa Maria di Leuca you can browse our site to choose the best solution for your stay in Salento. The apartments available are part of a small complex consisting of 3 apartments located about 300 meters from the sea.

Each holiday home it consists of 2 beds with the possibility of adding others on request, a cozy living room with kitchenette, a bathroom, a bedroom, a large outdoor area equipped with a shower. The house is well furnished and is equipped with all comforts: TV, washing machine, air conditioning.

Decide to spend one vacation in Santa Maria di Leuca it means choosing elegance, relaxation, well-being. Along the narrow streets of the inhabited center and in the countryside in the hills it is possible to practice physical activities of varying intensity such as: trekking, running or cycling. On windy days there are numerous sportsmen who practice surfing and other water activities.

For over 20 years present with private apartments, without intermediaries or agencies to make your holiday in Salento unique.